For me, rhubarb is strongly associated with my childhood. My grandmother used to make her own rhubarb compote and we would mix it through our yoghurt – delicious! In this day and age, I hardly ever hear anyone saying that they’ve eaten rhubarb. So I thought it’s time to learn more about it, and above all to find out: whatever happened to rhubarb?!

On our way to visit one of our regular rhubarb suppliers based in the Dutch province of Limburg, we drove past some of the few remaining places where rhubarb is still planted, grown and harvested nowadays. Erwin Schroijen had agreed to show us around his company so we could see for ourselves how his fresh, pure and sustainable rhubarb is produced.

Rhubarb is a seasonal product, isn’t it?!
We received a very warm welcome and were immediately taken into the barn, where the topic of conversation quickly turned to rhubarb production. It turns out there are two main types of rhubarb: ‘natural rhubarb’ and ‘forced rhubarb’. Natural rhubarb is grown outside in the fresh air, whereas forced rhubarb is produced indoors in a greenhouse or tunnel. Forced rhubarb is necessary in order to offer consumers a year-round supply. The forced-rhubarb season runs from around November to May, and natural rhubarb is available in the other months.

Tricked into growing
Erwin told us that the production of forced rhubarb involves an element of deception, because rhubarb plants are normally dormant in the winter. Therefore, to keep rhubarb production going throughout the winter, the whole rhubarb plant is dug up – roots and all – in the autumn and stored in a cool, dark place. That ‘tricks’ the plant into thinking that winter has arrived already, and it goes into dormancy.

To get the rhubarb ready for harvesting in the winter, the roots are placed in nutrient-rich soil in a heated greenhouse or barn to encourage them to produce new shoots, he explained. He then took us into a greenhouse, but it was completely dark inside. I wasn’t expecting that! I asked Erwin why rhubarb is grown in the dark. He replied that it keeps the rhubarb plants growing upright, and that’s what consumers want: nice, straight rhubarb stalks. Apparently this is an age-old method that was first used by monks who placed jars over their plants. The rhubarb is ready for harvesting after around eight weeks.

Of course, Erwin explained the process in much more detail than I’m able to do here, and with much more enthusiasm too. In fact, I’ve heard very few people talk about their work so passionately. “I even dream about rhubarb,” Erwin admitted. Smiling, his wife added: “His passion has evolved into true love.”

Some interesting facts about rhubarb

Important health benefits of rhubarb
No one is entirely sure where rhubarb actually originated, but it has been used as a natural medicine in China for many centuries. Rhubarb contains aloe-emodin which has anti-inflammatory properties.

It is good to eat rhubarb before and during pregnancy due to its folic acid content. Folic acid, which is also known as vitamin B11, is important for the early development of unborn babies.

Rhubarb lovers
The British are particularly big rhubarb lovers; they top the worldwide list for annual rhubarb consumption. They use rhubarb in all sorts of things: confectionery, jam, juice, syrup, on pancakes and even in champagne and beer.

Rhubarb-related innovation
In the Netherlands, there is a tight-knit community of rhubarb growers who regularly get together to exchange ideas. They are continuously searching for ways to innovate in terms of sustainability or packaging. For example, the growers’ community has responded to the needs of today’s consumers – who still want to eat healthily, despite having little time – by developing ‘sous-vide rhubarb’, which is sealed in a vacuum bag. Consumers simply immerse the bag in water at a relatively low temperature and the rhubarb cooks in its own juices, thus retaining its bite, flavour and nutrients. Sous-vide rhubarb is available in three naturally sweet versions: flavoured with honey, strawberries or oranges. It is a truly natural product containing no refined sugars.

Whatever happened to rhubarb?
Our tour of the production facility ended in the canteen, where we were treated to a slice of fresh rhubarb flan. The Limburg flan (called ‘vlaai’ in Dutch) is a world-famous regional speciality, and after one bite I knew why – it was utterly delicious! During our interesting visit, I not only learned a lot about how rhubarb is grown, but I was also reminded how readily available rhubarb is. In the ‘natural rhubarb’ season it can be found in most supermarkets, of course, but if I want to make things really easy for myself I can buy sous-vide rhubarb – ideal!

Erwin gave us some freshly picked rhubarb from the greenhouse as a parting gift, and as soon as I got home I searched for a sugar-free* recipe for rhubarb compote. I found what I was looking for on the ‘Blij suiker vrij’ website. It entailed boiling down some rhubarb together with cherries and dates, then puréeing the mixture and adding a small spoonful of honey to balance the flavours. Yum! It reminded me of the good-old days, sitting around the kitchen table with my grandmother. There are plenty of ways to use rhubarb in contemporary cooking, and it will definitely be on the menu for us at home more often from now on! 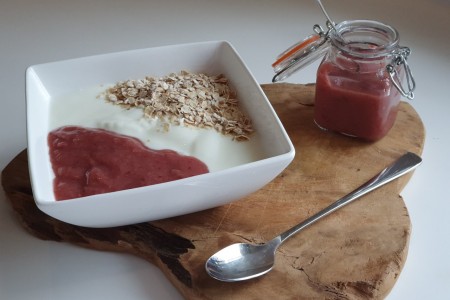 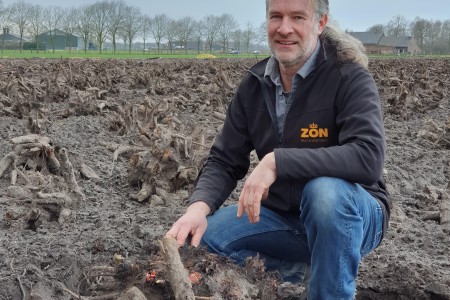 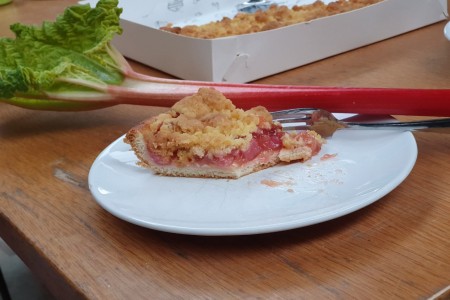